Every week the research group I’m part of discusses a paper from the literature. It’s a effective way of keeping up to date with new work in the field. I might get into a regular habit of writing up some thoughts from these discussions here, but whether or not this happens, I thought I would talk here about last week’s paper, “Energy consumption in buildings and female thermal demand“.

The field of building engineering spends a good deal of effort establishing standards for the effective operation of buildings. These cover a wide range of properties of a building, from comfort to sound levels. For thermal comfort, the UK follows a range of BS and EN standards – here’s a pretty comprehensive list. Thinking about these standards, and what they mean for energy demand in buildings, is an important part of the struggle to decarbonise the economy; around 30% of our energy use happens in buildings.

In the USA, ASHRAE standards do a similar job, but staggeringly the ASHRAE standard for indoor environments was determined using data from a single 70kg 40 year-old man. The paper focuses on gender differences in thermal preferences, and finds that there are differences between the sample they used and the standard which was based on one person – young adult females prefer a warmer office environment. Generally, there are a very large number of variables that are thought to determine thermal preferences. 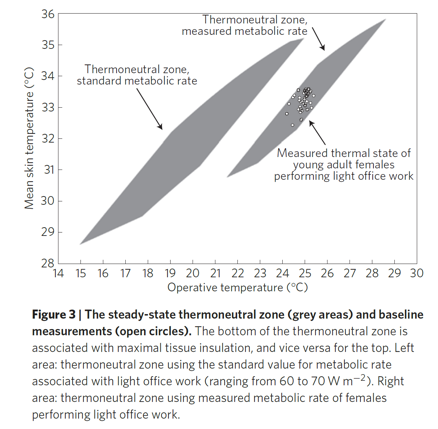 Initially, I had assumed that if this finding was generally true that overall heat demand should be higher, if we were to satisfy everyone’s thermal comfort. But, as Clare pointed out in the discussion we had, while that might be true of cold countries like the UK, for countries where thermal energy demand relates to cooling decreasing the overall cooling energy used in office buildings might make the overall population happier. This is potentially good news for reducing climate change – the population as a whole might be happier if we used air conditioning less. Although, it probably wouldn’t be that simple.

Reading this paper was a reminder too that designing buildings that keep people happy is extremely difficult. There is a terrifying nexus of considerations that must go into this process. While a standard based on a single man is clearly deeply deficient, questions remain about the tension between general standards and the preferences of actual building users. Negotiating these tensions whilst minimising energy use is problem of a wholly greater order of complexity. 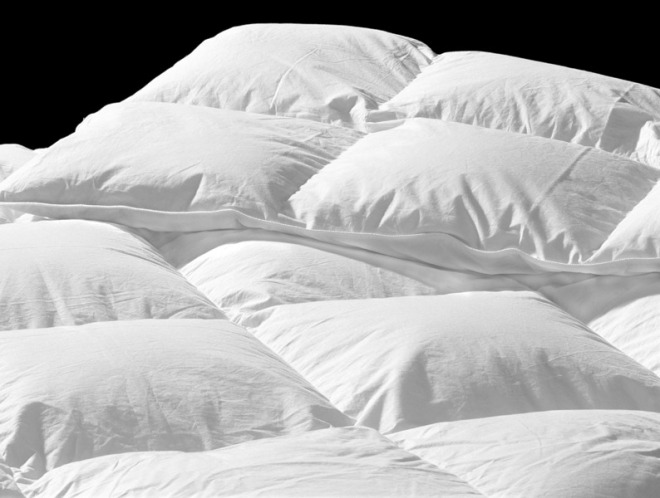 I’m a big fan of James O’Brien’s Mystery Hour. Each week, members of the public call in with questions about almost anything which are then answered, or not, by almost anyone, provided they can explain how they know what they know. A couple of weeks ago, Marcus from Dundee asked ‘What does tog mean?‘ for duvets and blankets. Melvin provided a correct answer, that ‘Essentially, it tells you how quickly heat travels across the duvet.’. But the development of a the tog has a much richer history. And so this instalment is all about the tog, a tog-blog, if you will.

The internet is surprisingly patchy when it comes to in-depth information about the tog. There are various duvet manufacturers that tell us summer duvets are up to 5 tog, and the warmest winter duvets around 15 tog. The higher the tog, the warmer you are over night.

There’s a little more detail about the technical definition of the tog, in terms of its measure of thermal resistance. In fundamental S.I. units, a tog is 0.1 m²K/W.  Since there’s usually a big difference between skin temperature and room temperature at night time, your body loses heat to the surroundings. You feel cold if the rate of heat loss is too great. But, as this paper found, sudden infant death syndrome can be associated with overheating, so getting togs right is important.

The methods for measuring togs is outlined in British Standard 4745:2005, using the aptly named ‘togmeter’. You can watch the dreamy process here:

What the internet is almost totaly unhelpful with is the tog’s origin. Wikipedia mentions the Shirely Institute with no reference. This is corroborated by a 2007 Spectator article, Feather your nest, which again mentions the 1940s and the Shirley Insitute’s connection to British Cotton Industry Research Association. So, feeling adventurous, I called up the Memoirs from the institute from 1942-1946 to the British Library. The year range I chose was a total punt, but I got lucky.

Here, for the first time (as far as I know) in digitised form is the spectacular genesis of the tog.

The paper was written by F. T. Peirce and W. H. Rees and published in the 1944-45 edition of the Memoirs. It’s an excellent example of the cultural and historical contingency of physical units – the equivalence of a tog to a ‘light summer suit’ demonstrates who was being borne in mind, and the mention of clothing too thick to fight in a sobering reminder of the times in which the tog was developed.

The UK climate is getting hotter. Predictions suggest that the south east might be 5°C hotter on average by the end of the century (Hulme, 2002). The government is also legally committed to reducing our CO2 emissions. These projected changes will require us to drastically rethink the way we live, and carefully design and modify our buildings with these considerations in mind.

Before we look at the risks of overheating, it’s important to remember how deadly cold winters can be to those who can’t afford to heat their homes. Last winter (2014/15), fuel poverty lead to the deaths of 15,000 people in the UK. This winter the effect is likely to be less dramatic, as temperatures have been so mild that met office records have been broken, but excess winter deaths will be with us in the UK for some years to come – unless homes fuel poverty is tackled. 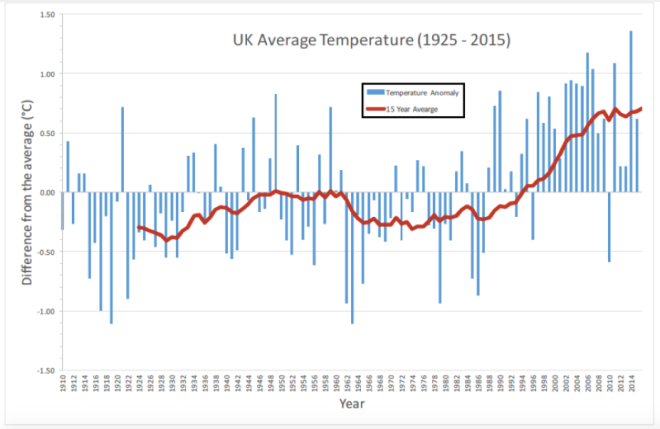 The main determiner of domestic energy use (and CO2 emissions) is heating. The amount a home is heated depends on many interrelated factors such as the physical characteristics of the house, the weather outside but also on the preferences of the occupants. The occupant preferences are complicated to model but the key factor at play is people’s thermal comfort. Put simply, this is whether people feel comfortable in a given set of conditions. Thermal comfort itself depends on a whole host of factors like an individual’s metabolism, how much people wear or what activities they’re up to – gyms need to be cooler than offices, for example.

As a rough rule of thumb, offices should at least 20°C, but what about an upper limit? How hot is too hot? The answer, as with many things in building science, isn’t simple. Zero Carbon Hub have published a review that looks into the various measures of overheating. The industry is split as how exactly to define overheating – some say there should be maximum acceptable temperature for buildings (around 28°) others say it depends on the outside temperature because people adapt and are more accepting of warmer temperatures in the summer. So where does this leave us?

The most recent example of the deadly impact of high temperatures comes from 2003. Across Europe, the extreme temperatures claimed the lives of over 70,000 people. In the England the toll was lower, at around 2000 excess deaths. This demonstrates that the heatwave was not felt equally everywhere – France suffered particularly badly where the high temperatures killed around 15,000 people.

Of course, like excess winter deaths, the deadly effects of high temperatures are not evenly distributed through society – the worst effected are usually older, sick or less well off. The UK government has responded, based on the projection that the 2003 extreme temperatures will be ‘normal’ by 2040. The NHS has published a Heatwave Plan for England which outlines what needs to be done in the event of a heatwave.

Responsibility also falls on landlords, local authorities and building owners to ensure that buildings are fit for habitation and work. The UK building stock is diverse and measures that work for one situation might not be effective in another. Careful attention is required to ensure any retrofit an owner installs, whether they be the installation of solar shading or improved ventilation, do not increase the energy consumption of the building. Air conditioning systems are often less efficient than natural ventilation.

The house I grew up in was a poorly insulated 17th century Welsh farmhouse, so the risk associated with overheating there are far less than those of being too cold in winter. But in general the UK housing stock is not currently equipped to deal with temperatures that are projected to occur in the decades to come. As ever, it tends to be that those in society least able to make changes to their living conditions are those at greatest risk of harm.

A balance needs to be struck by policy makers to ensure the overheating risks are addressed without compromising the essential work in improving housing efficiency and reducing our CO2 emissions. Given the lessons of 2003, this problem is far greater than issues of comfort, but potentially one of life and death.

Academic references I have collected are available here